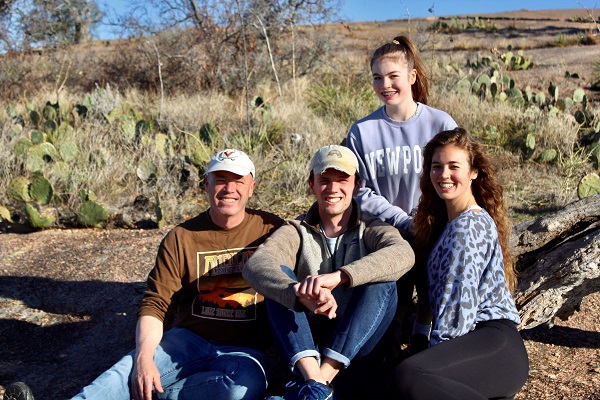 One in eight women will be diagnosed with breast cancer in her lifetime. For the Thompson family, that one person was Maureen, a wife to Gary, and mother to three children, Taylor, Kyla and Katelyn.

Maureen died from metastatic breast cancer in 2014. Since then, Gary has taken on dual parenting roles for his kids and has always tried to be who anyone needs in the moment. But he says that his success as a father is not just about what he does.

“It’s also what they do. I think our kids are capable of so much more than we realize and that I’m a better dad when I let them make me better, not just the other way around,” Gary said.

Adds Kyla, “A lot of the things I would say to my mom now are said to my dad, and I think he’s taking it well. And he’s always there for me, all the time, which I think is all you can ask for in a parent.”

Father’s Day has always been a somewhat different tradition for the Thompson family. It used to be a day when Gary says he’d do a “whole lot of fathering” so Maureen could have a break and pamper herself, because inevitably, she always did a “whole lot of mothering” on Mother’s Day and never got a break.

It is now a special time of reflection. “You know, it could be a day like any other, but it’s not. Because of Maureen, I’m a father, and when I see these three kids, they are the products of our love, and so I see her. Father’s Day is just one more chance to reflect on the life and love Maureen and I had together,” Gary says.

Losing a wife to breast cancer has been an emotional journey for Gary. And something he and his children are still moving through.

“I will always grieve Maureen, but something else the kids and I talked about is, looking back and remembering are not the same thing. If you look back and try to look forward, you will remain stuck in place, but if you remember and look forward, then that’s how you begin to move through the rest of the journey,” Gary says.

Laughingly, he adds that Maureen still expects him and the kids to live their fullest lives and make her proud. “None of us want to be the first one to heaven and have Mom ask us, ‘Whatcha been doing?’ So we gotta have a good answer, so we gotta move forward, realizing that every emotion, whatever it is, there’s no right. There’s no wrong.”

Gary encourages other fathers who might have lost a wife or are going through a breast cancer diagnosis with their wife to take care of themselves.

“You’ve gotta take care of yourself first, loving yourself and taking care of yourself, so you have the energy to go to all the treatments and to love on your bride and to do everything else,” he says. “You won’t have what it takes unless you take care of you, and that’s not selfish. It’s self-full, as a friend once put it.”

Kyla says her dad is the best role model for herself and her siblings. She says from the minute he wakes up to the minute he goes to sleep, he’s always caring for others, responding to her text messages and helping her through whatever life brings her way.

“I want to thank you for being there in all of my happy times and being right by my side when things aren’t going the way I want them to go. Happy Father’s Day, Dad,” adds Kyla.

Susan G. Komen honors fathers everywhere on Father’s Day. Whether you’ve been affected by breast cancer, or not, we encourage people to honor their dads and father-like figures in their lives.