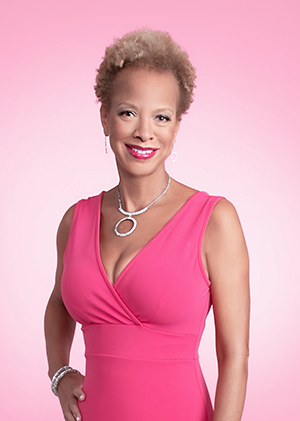 At the age of 36, Michelle had her initial baseline mammogram, an early baseline suggested by her physician due to her dense breast tissue. She was called back two days later for further evaluation via needle aspiration biopsy, which was inconclusive, so a surgical biopsy was ordered. She was terrified because I had a 7-mo old baby, 2 and 5-year-old kids. Her biopsy returned a benign diagnosis.

Fast forward to 2015 when Michelle decided to register and be a participant in the Susan G. Komen Race for The Cure. This Race participation became paramount to her. She had an unyielding desire in her heart to join and walked in honor of two survivors who were dear to her (Miralyn Maynor Neal and Dr. Kim Barnett). She was overwhelmed with the sea of supporters and event activities. Given the exuberant financial support, she questioned the lack of a cure.

Two weeks later she was called back for an ultrasound after her mammogram. On March 9, 2015 she was diagnosed with breast cancer. Contrary to Michelle’s first incident, she was not fearful. She loves God and had confident in his will. Michelle knew given the series of events; God chose her for a reason. After numerous tests, Michelle learned that she was triple positive. Chemotherapy and radiation were imminent. Her treatment regime included a relatively new medication for HER2 positive patients that greatly reduced risk of return. Most importantly, she no longer questioned the results of fundraising efforts because she was the benefactor of a of a drug that previously was unavailable. It became crystal clear that significant strides are occurring to prolong life as we Race for the “CURE” and support fundraising efforts of Susan G. Komen.

Michelle drew strength from her children and her faith. At the time of her diagnosis, her daughter was in 10th grade, her middle son was in 11th, and her eldest son was a sophomore in college. She calls her eldest son “her right hand” and her younger two children “her left.” They looked to her as a radar for concern. Michelle knew she had to display strength and a positive outlook.

She had an amazing village of uplifting friends and family. Her mother is 93 years old. She is an amazingly resilient woman. Michelle learned the power of strength watching her. Her father was diagnosed with dementia prior to her illness, and she chose to shield him as much as possible.

She never knew the depth of her resilience and strength until she went through this eye-opening experience. She focused on survival and the next steps. She believes we all have a purpose and have to LIVE LIFE according to that purpose.

(Michelle has two half-sisters that are breast cancer survivors.)

“I’m thankful for my struggle because without it I wouldn’t have stumbled across my strength.”