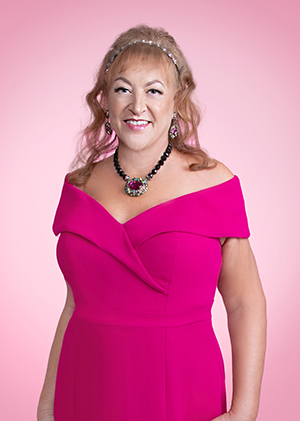 Lisette’s journey with breast cancer began in early 2014, when she had quite a sharp grinding pain. She never for a minute suspected that it would be breast cancer and thought it was a blocked milk duct. She was up to date on her mammograms and there was no history of breast cancer in her family. When she was going through her initial breast cancer treatment she felt so alone and did not know anyone who had breast cancer, and she was the only person in any gathering she went to that had a head wrap, the only one at her work, etc. She had no peers, and no emotional support. Her busy lifestyle with two sons in high school and a 4-year old daughter prevented her from seeking out a support group.

The year after her initial treatment was over, she found out about Lighthouse Dragons, a dragonboat team in Jupiter. She gave it a try and it soon became very important to her, not only for exercise and camaraderie, but also the emotional support from other survivors who “got it”.

Most of 2014 was taken up with treatment, where Lisette described it as “the full shebang” of breast cancer protocols, firstly with neoadjuvant chemotherapy, “the red devil”, (this is where she learned what the word “vessicant” means!), followed by a mastectomy with immediate reconstruction with expanders. Due to the delay between the end of the chemo and the surgery, the breast surgeon observed and stated that the breast had been “riddled with tumors” when he opened her up. After surgery, Lisette had 37 rounds of radiation as it was a very large area. In 2015 she got to swap out her expander for a silicone implant.

Fast forward 3 years after being on Tamoxifen, where her tumor markers showed a spike and a PET scan revealed metastasis to the spine. Luckily she was fast-tracked to get cyber-knife surgery because one tumor was all encompassing one vertebrae and it had already breached the spinal column. The cyber-knife was delivered over three consecutive days and was painless. It was mind blowing how the doses of radiation were delivered in very small bursts and at all angles with amazing accuracy. The science and the plan was to deliver the beams from all angles, with the destination being where the individual beams all met, the dosage-dense target. By using so many different approaches, the damage to surrounding cells was minimized. It took the radiologist and a nuclear physicist at least 8 hours to map out their plan of attack for this type of ‘surgery’. Since the cyber-knife surgery in 2017 Lisette has felt very few effects of the metastatic breast cancer, for which she is eternally grateful (many of her metastatic sisters suffer terribly from pain).

Lisette blew through 6 lines of treatment in 3 years, and started back with regularly infused chemo again in early 2019. Now her “symptoms” are basically the management of the side effects from the weekly chemo, mostly debilitating fatigue. This fatigue has a beginning and an end, so it just takes management and planning to make it through to the other side. Unfortunately, that has cramped her active lifestyle quite severely, and she has found that she has to “go with the flow” much more, and has had to cancel some social events. She no longer schedules many activities, and she doesn’t venture very far from home.

Lisette’s sister died of pancreatic cancer 10 days after her son turned 10. She had hung on for his birthday. Now Lisette fights cancer to raise her daughter and see her through college—she needs her momma! And she is determined to beat her sister’s “expiration date” and live until her child is 20 or even 30! She would love to become a Grandma.

All Lisette’s siblings and her mother are in England. She is the only transplant. At the time of her diagnosis, she had two sons in high school with busy band performance schedules, and a daughter in preschool. She is a single mom (widowed). Her eldest brother asked if she wanted him to come over to talk to the doctor and for starting chemo, and although she needed the help, she only said “let me get the first dose and see how it goes”.

Her brother had a friend who told him what it was like to go through chemo, so he didn’t listen to Lisette and flew to the U.S. to be with her. Lisette’s chemo was A/C and very toxic, so she was pretty much immobilized by it for the first two days after infusion. Her brother originally only came for two weeks but lengthened his stay to five weeks, upon which her sister flew over. They only had one night both together with Lisette, then the one took the other to the airport and she had continuity of care for several months.It was particularly meaningful to Lisette because she never asked for help but they dropped everything and just showed up, because they knew she was going to need it.

Her brothers also came back in 2019 to help with some house maintenance. Lisette was pretty fatigued with her metastatic treatment and had let the house upkeep go. One brother got rid of a broken-down fence and built a new one, plus numerous “odd jobs”, and the other brother put together a garden shed, painted etc. Although not directly related to her treatment, these acts of kindness boosted her spirits tremendously, put her household back into a respectable mode, instead of decrepit disorder all around.

Dragonboat racing (she now follows the team on social media).

“I am most thankful for finding the dragonboat team Lighthouse Dragons where I have built a network of beautiful friends of the heart, such lovely and caring people, and a sisterhood of peers.”