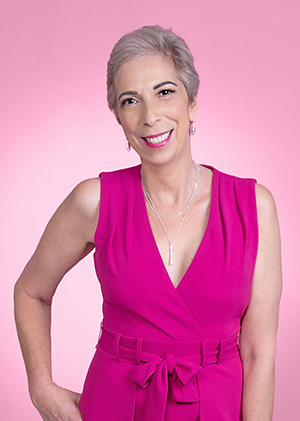 Lisa was diagnosed in 2013. She underwent surgery and had a double mastectomy. She had a few complications with the implants months after the surgery, but she got it fixed and remained healthy.

Last summer – 4 months after reaching her 5 year milestone, she was rediagnosed. This time her treatment was a lot more intense. She had surgery to remove the cancerous mass and then had to go through 18 rounds of chemo and 35 rounds of radiation.

Lisa has also suffered with Crohn’s Disease since she was 18 years old, so during a time when your immune system is lowered due to Cancer Treatments, she was already at a disadvantage. However, she continued to remain strong and persistent throughout the entirety of her treatment. She is most thankful for the support from her husband, Rich and two children – Josh and Talia, 17-year-old twins who just started their senior year at Palm Beach Central High School. Without them she knows she wouldn’t have been able to fight every day.

She is also grateful for Komen, who was there for her from the beginning of her journey in 2013 and helped her with her bills when she didn’t have health insurance. She always vowed she would do everything she could to help with their mission. Over the years she has lived by that promise. Standing with other women (and men) who have traveled this road to tell her story and help raise awareness and funds for Breast Cancer. Being selected to be a Warrior is the greatest honor for Lisa.

Lisa’s husband Rich of 21 years has been there throughout her journey. Her first round was in 2013 when her kids were 10. He had to become mum AND dad! Luckily for both, Lisa’s parents came over from England and stayed with them for a few weeks until she was able to get around.

When she was diagnosed for the 2nd time, her kids, Josh and Talia, were 16 (twins) and her daughter drove, so it was a little easier on all of them. They were both amazingly supportive and even had special shirts made up for the family to celebrate her last chemo!

Talia is the one who started the family on their Komen journey. She wrote a poem for Lisa’s 4th year anniversary, which she sent to Nancy Brinker.

“I am most thankful for the support from my husband, Rich and 2 children – Josh and Talia. Without them I know I wouldn’t have been able to fight every day.”