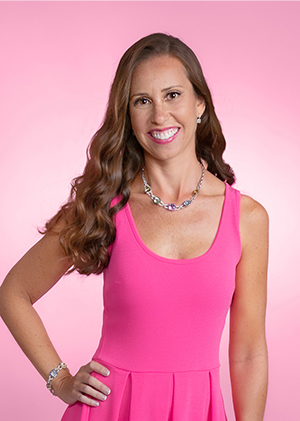 Jessica’s husband, Tim, discovered the lump in her breast in January 2019. She was still nursing her youngest daughter at the time. After an exam, her doctor recommended a biopsy. It was positive and devastating to Tim and Jessica—she was only 37 years old with a one-year-old and five-year-old daughters. They thought it was a mistake. Jessica was in very good shape and too young for this to happen. The doctor told Jessica to stop breast feeding immediately, which was very painful physically and emotionally. She always held it together and never let her daughters see anything was wrong.

The surgery, which would include a double mastectomy was scheduled for March, which seemed like an eternity. It took eight hours and the margins were clean. Jessica is very thin and did not have a lot of breast tissue, which made the healing process difficult. The surgeon did not like the way the skin was healing, so Jessica had to immediately start hyperbaric oxygen therapy. She is claustrophobic and to this day, Tim does not know how she summoned the courage to spend two hours, twice a day, for a month in a confined glass chamber, but it helped the healing process tremendously.

Jessica’s family gave her the strength to fight her cancer. Ashton, her youngest daughter, was just 13 months old and still nursing when she was diagnosed. Being told to stop breastfeeding immediately was such a hard transition for her. It was agonizingly painful both physically and emotionally, but Ashton looked up at her and smiled on that January 25, 2019 and took her milk from a cup. She made everything so easy and Jessica knew she had to fight tooth and nail to be here to watch her and her older sister, Leighton, grow up.

Jessica’s husband of 13 years, Tim, is the one who discovered the lump in her right breast. He was her calm in the storm and kept her smiling when she didn’t think she could. Her children are her world and the reason she made it through in the way she did. She never cried in front of them and always reassured them that Mommy was going to be just fine.

Jessica’s older sister was there when she got the news that her biopsy came back as cancer. She was Jessica’s eyes and ears at so many appointments when she couldn’t seem to focus.

Her parents are “the best.” As a cancer survivor himself, her dad went with Jessica to all her oncology appointments, both in Jupiter and in Orlando. He waited for countless hours in doctors’ office waiting rooms and even sat in the basement of St. Mary’s Hospital while she received her first hyperbaric chamber treatment. Her mom was extremely helpful with her girls while she was in the hospital and when she came home to recover. It was a blessing to have everyone so close by during such a trying time.

After her breast cancer surgery, Jessica started training and finished two half marathons, multiple 5K’s and a 10K in the past year. She grew up playing tennis competitively and running cross country. She loves being outside and going to the playground, the pool and the beach with her girls.

“I am blessed beyond measure with an amazing family and a tribe of incredible friends. I am thankful for my struggle because without it, I wouldn’t have stumbled upon my strength.”