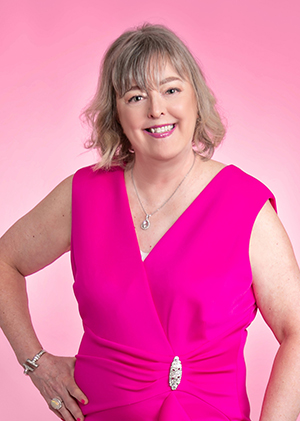 After extensive testing, Carole’s doctor called her on November 20, 2014 with four life-changing words: “You have breast cancer.” She had three tumors on one side and possible lymph node involvement stage 2 HER2 positive. She was grateful to know that Herceptin is now the miracle drug for her kind of cancer. Even so, the diagnosis was a punch to the gut. She asked immediately, “How do we fight? Who do we see? Please, can we do something today?”

Looking back, Carole immediately went into survival mode, although she didn’t realize it at the time. She is thankful for the Lynn Cancer Institute at Boca Raton Regional Hospital. Over the next 21 months, she had chemo (the red devil as she was told it was called—the most powerful chemo protocol they had), followed by surgery (double mastectomy), then radiation.

All in all, Carole had four “red devil” chemo treatments, 48 physical therapies for range of motion after surgery, 12 surgeries and procedures, 17 Herceptin infusions, 21 antibiotic infusions for 3 major staph infections post-surgery and 33 radiation treatments.

What she has learned: She has more strength than she ever thought possible. She has a family that rallied around her more than she ever could have hoped for and that go her through. She learned that the human survival spirit is something hard to describe unless you go through a difficulty in your life. It was pretty powerful for Carole.

She has learned more about what is important in her life more so than ever and to be grateful for everything in each day. She hopes to continue to give back; to help someone else who receives a diagnosis.

She remembers the day she had the diagnostic mammography and a nurse who was a cancer survivor herself told Carole she would be OK. That she was where she was a year ago. Carole will never forget that hand hold and that kindness.

She will also remember that day when the radiation and Herceptin treatments were over, the last big step. She got in her car to go home and cried with relief. Granting herself permission to sob; she knew then she would be OK. She hopes and prays more will be OK. That is her hope. The Power of the Pink.

The day before Carole’s surgery, her Godchild and niece came to visit and brought the story of what was to become the Power of the Pink TEAM HART. Her extended “mega family” had purchased pink T-shirts, which said, “Team Hart, In This Together.” The day before the surgery, Carole received a photo collage of each of them in their shirts.

Carole is an only child who married into a family that had ten children. After 42 years of marriage, there are now “a truckload” of sisters, brothers, and extended family members—all in pink T-shirts, and all from all over the U.S. and a few from military bases overseas. Her good friends lit up her social media with the shirts as well.

Photography, scrapbooking, decorating for the holidays with a passion.

“I am most thankful for family and friends that were always there and for God who provided strength.”