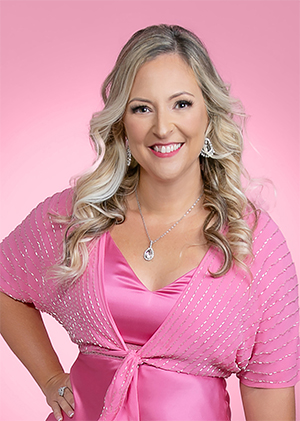 Seven years ago, when Alicia was 34-years-old, she was at home with her husband, four-year-old daughter and seven-year-old son when she suddenly felt a pain in her right breast. Feeling a lump, she made an appointment for a mammogram and ultrasound. Two of Alicia’s aunts and her grandmother have had breast cancer, but still being young, she thought she would be OK. Her exams led to more ultrasounds and a biopsy. On April 1st, April Fool’s Day, her worst fear was realized—her doctor called to tell her she had breast cancer. She was diagnosed as stage 3, HER2+ invasive ductal carcinoma. It had already spread to her lymph nodes. Luckily, her doctors wanted to aggressively treat it and her treatment began immediately.

Her treatment began with TCH neoadjuvant chemo—once every three weeks for a total of 18 weeks—to shrink her lymph nodes so that the surgeon would not need to take out so many during surgery. She used Penguin Cold Caps during her chemo treatment to freeze her scalp so she would not lose the hair on her head. This helped her and her family have a sense of normalcy. Following chemo, she elected to have a double mastectomy with expanders placed in preparation for reconstruction. While the surgery was awful emotionally and physically for Alicia, she was thankful that she had a total response to chemo. The doctors couldn’t even find her tumor, but they removed 11 lymph nodes. Once recovered from surgery, she began radiation. She also continued taking Herceptin through her port for a full year and continued on with the the reconstruction process.

She had made it! Three years and two more reconstruction surgeries after her diagnosis, Alicia found out she was pregnant with “a miracle baby,” showing that there is life after cancer.

Alicia is now paying it forward by helping other women through their journey. She helped create two different support groups—one at Memorial Regional Hospital and another at UM Sylvester Plantation. She is very open about her story and talks about it whenever she can, because she believes women must know and understand that breast cancer can happen to anyone. She welcomes calls from anyone who wants to talk about it, especially young women, to share how to talk to their kids about cancer, and other related topics. She is very active on Instagram and has met many women around the world and is involved in the Florida Breasties Instagram group and others. Having a miracle baby after cancer makes her feel that she can bring hope to other women and show that there can be life after cancer.

Alicia’s family was incredibly supportive. Her dad became her medical navigator, joining her for doctor appointments and acting as a sounding board to help Alicia and her husband make difficult decisions. Her mom was a major caregiver in helping with Alicia’s two young children and caring for her home. She also stayed with Alicia overnight in the hospital and at home after surgeries. Her children, Ryan, (then seven) and Addison (then 4) brought joy and distraction to Alicia. Her daughter would dress up as the cartoon character Doc McStuffins and “take care” of Alicia while her son continued to play baseball and soccer, which she enjoyed watching when she could. Alicia’s husband was her lifeline, as her caregiver and love, taking care of her drains, lifting her spirits when she cried and being the backbone of the family when she had no strength.

Alicia enjoys watching her children play on their travel soccer teams, learning about DoTerra essential oils, getting together with friends and family, traveling, and going to the beach. She is passionate about teaching others about autism and breast cancer.

“I am thankful for life. Cancer helps you appreciate your life in a miraculous way—the colors of flowers are brighter, the love for your spouse, kids, family and friends are deeper, and life’s little stressors are no longer important. Life is truly a gift.”